What are bleeding gums?

Bleeding gums are very common, in fact they are one of our most common complaints. Bleeding gums can be a symptom of a number of issues, some of them quite serious. The vast vast vast majority however are simply down to the oral hygiene not being up to scratch. Regardless, the safest thing to do is see a dentist and get some professional advice.Come and see our Maroubra dental team, if you’re having issues with bleeding gums- we’ll do all we can to solve the problem.

Why do I have swollen gums?

Bleeding gums are usually a cause of improper oral hygiene. As plaque is inadequately removed from the teeth and the gum line, it causes the gums to be inflamed—a condition called gingivitis. Over time, this plaque will harden forming calculus (like the build up most people get behind their front teeth. This attracts more plaque and the process continues. If left, this can lead to a more advanced form of gum disease called periodontitis. Since there can be a lot of causes for bleeding gums, let’s categorise them for easy reference. Sorry, but some of the items listed may cause you to worry:

Bleeding gums may be a side effect of some more serious conditions. We have chosen not to list them because if you have other signs and symptoms that are more distinctive you will need to be diagnosed by your doctor.

Changes in your body’s chemistry can or may increase bleeding; generally they do not cause it, merely exaggerate the response of the dental causes:

Some medications can also cause an increase in bleeding- again it is most likely an exaggerated response to a dental cause.

Smoking actually reduces bleeding gums as the nicotine causes the blood vessels in the gums to constrict. No- that’s not an excuse to do it! The underlying damage is still occurring just the symptoms to demonstrate it are being masked- so more damage often results, because you have less indication if there is a problem. If you stop smoking, expect your gums to bleed a lot, this is just your body’s response returning to normal. Keep going and stick with it, it can take a couple of weeks to calm down but don’t let that put you off – kick that habit!

Are there other symptoms I should look out for?

Other signs and symptoms you may notice which will mean it is important to see a dentist include:

Seek immediate medical attention if you happen to be bleeding anywhere else on your body. Bleeding gums may not be painful initially, but they can be a sign of more serious gum disease going on underneath. If this is left untreated, significant irreversible damage may occur over time which can lead to pain, moving teeth and teeth needing to be extracted (late stage gum disease). Remember, it is far easier to treat a condition while still in its early stages.

What happens when I go to the dentist?

To assess the underlying condition, your dentist will have to ask you questions about your bleeding gums and oral hygiene. You may also be asked about your diet, if you’re taking any medication, whether you’re undergoing hormonal changes (extra bleeding during pregnancy is quite common) and whether you have symptoms other than the bleeding gums. 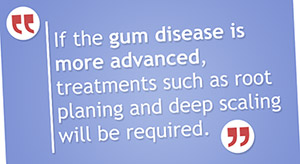 Your dentist may also ask to take an X-ray of your teeth and jawbone to assess your condition further. Diagnostic tests such as Complete Blood Count (CBC) or blood differential may also be investigated later but only after you have proved an excellent level of oral hygiene for a short period to rule out the simplest and most common causes. If your dentist determines that gum disease could be the cause of your bleeding gums, he or she can provide a professional teeth cleaning to remove plaque and calculus build up. They will also give you instructions on how to properly take care of your gums and teeth at home. You may see a hygienist to do this. If the gum disease is more advanced- treatments such as root planing and deep scaling will be required in addition- to help clean under the gum where the toothbrush can’t reach. Medications may also be prescribed to help fight oral bacteria. Very loose teeth causing pain are almost impossible to save and will require extraction and then filling the gap.

What home treatments can I do for my bleeding gums?

Because the cause is unknown you should arrange a visit to see your dentist in Maroubra. If gingivitis is suspected- it’s all down to improving the hygiene and removing the plaque with proper brushing, flossing and pixters (if they fit). Because harder deposits are often present that you can’t remove, a visit to the dentist is necessary anyway. Here’s a couple of suggestions that may also help:

A common misconception about bleeding gums is that if you cut back on brushing and flossing, the inflammation on your gums will eventually die down. However, doing so will only cause more plaque build up and therefore worsen the problem. Brush twice a day and floss in the evening before brushing, to remove food debris that is stuck in your teeth and gums. Make sure you do this gently and carefully to avoid further irritating the gums. Proper technique is important.

How can I prevent bleeding gums?

Now that your bleeding gums are under control, there are a few steps to keep things this way: